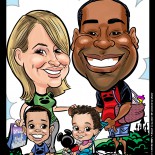 How My Son Became an Addict and Collector

Last February, we were about two hours into a six-hour road trip, and my son (then 4), was bored. I know, I can hardly believe it either. What preschooler doesn’t love a solid hour of picturesque Connecticut countryside from the confines of a car seat?

Anyway, as the queries of Are we there yet? and How many more minutes? increased in volume, I was desperate to keep him occupied, because his one-year-old sister was blissfully sleeping away her boredom in her car seat.

So, I pointed to an out-of-state license plate. I explained how each state’s plate looked different, some had pictures or special themes, the whole shebang.

I remember this moment vividly because it birthed a junior-sized license plate junkie. It opened up a whole new world to him.

From then on, every time we got in the car, he’d hunt for license plates with a vigor I hadn’t seen before. He was totally addicted.

Whether we were on the way to Target or to the grocery store four minutes away, he asked me to speed up to other cars. He wanted to catch a glimpse of Colorado, or see if that huge semi hailed from Indiana or Maine, or perhaps North Dakota.

“You look on your side, I’ll look on mine!,” he’d order. He asked me to pull into parking lots to look for interesting ones. 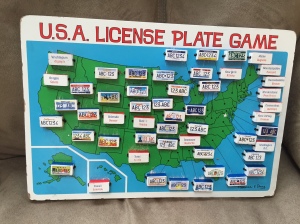 Obviously, we had to get this awesome Melissa & Doug game for him to use in the car.

Then I remembered I still had the license plate from my Old Kentucky Home, so I dug it out and he hung it above his door. He was born there, so it was a cool one to have. 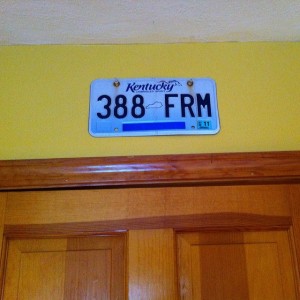 Soon, I downloaded a license plate app, so he could see and study all the different plates of each state. (Random note: Maryland has 924 different license plates. Excessive, right?)

When I drove up to Maine last spring, I found him a souvenir license plate and brought it home. Little man was over the moon, obviously. Shortly after, my mom sent him a few small, personalized souvenir plates of Hawaii and Texas — his two favorites at the time. His license plate collection was born.

So, randomly, on Facebook one day, I asked if close friends and family would keep their eyes peeled for any souvenir plates in their states. His quest was to get license plates from all 50 states. I didn’t know what would happen, but it was worth a shot.

Next thing you know, people started coming out of the woodwork to help my boy achieve his goal. Not only family and close friends, but high school friends I haven’t seen in decades, and new friends I’d met just a few months before. And they had real license plates, just sitting around, that they were willing to mail him. 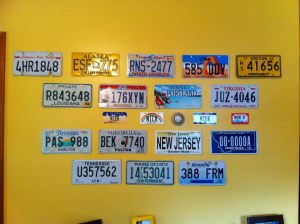 Checking the mail became the excitement of each day, and the license plates kept arriving. The fact that so many people, with busy lives and families, wanted to help my son with his collection just melted my heart.

Each time we received a package, we’d take a photo with Nick holding the license plate, pop it in a thank you card and send it out. It was fun for him, and also helped teach him to be appreciative and to have manners. 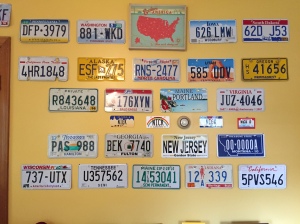 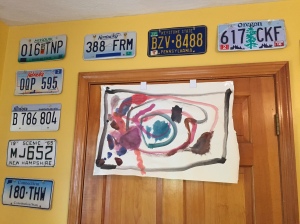 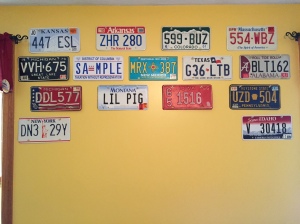 The second wall coming to life.

And, he also got this from his best friend for his birthday. 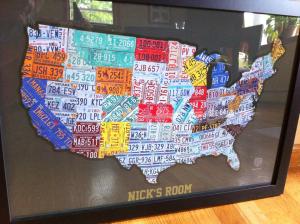 License plate map of the U.S.

Absolutely amazing. He only needs 13 more states to achieve his goal.  And thankfully, he’s chosen something to collect that will be easy for me to tuck away for him later.

The power of Facebook and fantastic people… it’s a beautiful thing.

What, if anything, do your kids collect?

2 comments on “How My Son Became an Addict and Collector”

My Tweets
Join 1,155 other subscribers